Women are in fact more likely to choose lower-paying jobs, but numbers do a poor job of highlighting the cultural biases that can shape their decisions. 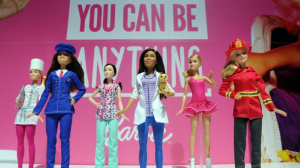 In discussions of the gender-pay gap, there’s one counter-argument that comes up a lot: The gap isn’t real, because after adjusting for the different types of jobs men and women tend to have, the gap shrinks to single digits. And so, the argument goes, men and women aren’t paid the same amount of money because they are choosing to go into different professions, and the labor market rewards their choices differently. In other words: unequal work, hence unequal pay.

There’s a lot of truth to this: Men and women do tend to choose different careers, so much so that researchers have a term for it: “gender occupational segregation.” And because of this occupational sorting, the most commonly mentioned figure of the gender-gap debate—that an American woman only earns 79 cents for every dollar a typical American man makes—is indeed too simple.

But the occupational differences explanation, when presented without caveats, is also problematic. “The story is a lot more complicated than that,” says Elise Gould, an economist and the co-author of a new report from the left-leaning Economic Policy Institute, about gender and compensation. “We wanted to disentangle the question of ‘choice’ and what’s happening between two workers that are sitting right next to each other in a cubicle … What’s going on behind that in terms of cultural norms, expectations, work-family balance—all the different components that might lead women to be in certain kinds of jobs differently than men.”

Researchers often control for certain variables if they suspect that those variables might be exaggerating the size of an effect. In the case of the pay gap, economists often adjust their data to compensate for the fact that, for example, men are overrepresented in high-paying computer programming jobs, and women are overrepresented in low-paying service jobs. These adjustments lead to numbers that stand as good estimates of how big a pay gap would be if men and women were represented in equal numbers in each profession. There are usually other variables that researchers control for, too; geography, experience, and job titles are other variables with known effects, so filtering them out from the numbers is a step toward isolating the effects of gender on pay.

But the striking thing is that even after adjusting for so many factors, there’s still a statistically significant pay gap. (Pay-gap skeptics often note that the gap shrinks after taking these factors into account, but it’s supposed to—those statistical adjustments were intended to create a more definitive, standardized measurement.) The fact that a gap remains at all after such adjustments shows that the problem defies any simple explanation. As Robert Hohman, the CEO of Glassdoor, wrote a few months ago in Fortune:

Factoring differences in education, experience, age, location, job title, industry and even company, our latest research reveals that the “adjusted” gender pay gap in the U.S. amounts to women earning about 94.6 cents per dollar compared to men. It is remarkable that a significant gap persists even after comparing male-female worker pay at the job title and company level.

That 5-cent difference is evidence that something isn’t getting accounted for in all those variables that economists are adjusting.

The premise of the occupational-differences argument is that if women are choosing jobs that are easier to do, they shouldn’t be paid the same wages as men. But what that argument—that women are to blame for keeping their wages down because they’re choosing bad jobs—doesn’t take into account are the many things that contribute to the way men and women choose their careers.

Gould, along with her co-author, Jessica Schieder, argue that the decisions women make regarding their careers do not happen in a vacuum: These are decisions shaped by cultural norms and expectations, societal forces that aren’t cleanly captured by pay data. Gould and Schieder point to a multitude of messages that women get from society about what sorts of jobs they should pick: The expectations of American mothers could lead women to take lower-paying jobs because they’re more likely to offer flexible (or shorter hours), while fears of discrimination might steer them away from higher-paying professions. In other words, adjusted statistics could be missing the role of discrimination in the processes that lead women to choose the careers they do.

“Too often it is assumed that this gap is not evidence of discrimination, but is instead a statistical artifact of failing to adjust for factors that could drive earnings differences between men and women. However, these factors—particularly occupational differences between women and men—are themselves affected by gender bias,” Gould and Schieder write.

And while there are many efforts to push women towards studying subjects that would funnel them into higher-paying fields, such as science or tech, it’s worth remembering that the adjusted gap still exists. Closing it would mean paying attention to all the ways that women make choices about their careers—and the inequities they can experience after they make them.