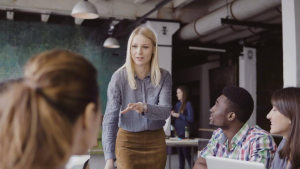 At a time when movements like #MeToo and Time’s Up have propelled gender equality in the workplace to the forefront of the national conversation, companies’ efforts to empower women are more important than ever before. And thankfully, it seems they’re more prevalent too.

The annual Top Companies list produced by the National Association for Female Executives (NAFE) this year highlights a record number of employers. A division of Working Mother Media, NAFE expanded the 2018 rankings from 60 to 70 in response to an influx of submissions.

“There were more companies that deserved to be on the podium,” says Subha Barry, senior vice president and managing director of WMM. “These companies really believe that being ambitious, public about goals and transparent about how they’re reaching them is good for everyone.”

To determine the list, NAFE reviews applications from companies with at least two women on their boards of directors and a minimum of 1,000 U.S. employees. Applicants are asked more than 200 questions on female representation at all levels within their organizations, as well as programs and policies that foster the advancement of women.

So, why the uptick in interest? “Having women in senior, visible positions of authority—whether as a CEO, the direct report to a CEO or a board member—sends a powerful message, both within the organization and outside,” says Barry. “These companies are not willing to take their foot off the pedal.”

Among the top companies is Chico’s FAS, a retailer known for women’s apparel brands White House Black Market, Soma and its namesake Chico’s. Under the leadership of CEO Shelley Broader, the company debuted in NAFE’s top 10. Recognized as a 2020 Women on Boards Winning Company six years running, women make up 96% of Chico’s FAS’s workforce and 91% of executive leadership. Such representation at every level of the organization is vital to progress, says Barry. “I’m a big believer that if you can see it, you can be it. … If women are 50% of the population, they should be 50% of the workforce at every level.”

Chico’s FAS is in good company. L’Oréal USA’s 47% female board of directors helped boost the beauty brand into the top ranks alongside Deloitte, where a focus on leadership development for female employees is paying off: In 2016, 42% of all management promotions were awarded to women. IBM’s longstanding culture of inclusion fostered through career advancement programs has earned the tech giant a spot on NAFE’s list each year since its inception.

“Consistency of senior leadership, engagement and commitment is key,” says Barry. “When you have generational CEO commitment, that’s when you see great progress.”

The companies that make up NAFE’s ranks are evidence of a changing work environment: Women sit at the helm of 14% of the top companies, and 69% of the CEOs have made managers’ compensation commensurate with the progress of women workers. Ten of the organization’s C-suites and five of the boards are at least 50% female, and promotions for women at all levels grew from 44% in 2017 to 46% this year.

While this progress cannot be ignored, neither can the need to make more headway. Just 36% of women were among the top 10% earners in 2018, down from 41% in 2017. Similarly, the percentage of female executives leading divisions worth more than $1 billion dropped from 27% to 21%. This drop-off, Barry notes, can be attributed to the increase in companies represented on the list, as well as economic shifts. After all, if business declines, so will the billion-dollar opportunities.

One way Barry believes companies can help women get ahead is through sponsorship—a more active form of mentoring, in which senior colleagues advocate for an employee’s professional success. The concept isn’t new, but the idea of a formalized sponsorship programs is catching on, with 66% of NAFE’s Top Companies offering it.

Nevertheless, there’s still room for improvement, and Barry is confident that CEOs are committed for the long-haul. “I think because of social pressure, we are actually going to see an improvement in the numbers,” she says. “I don’t think we have any right to rest until we get to parity.”